Lately my work has taken me to examining the roots of some basic human rights concepts, among them, freedoms–freedom of assembly, freedom of speech–freedom to be the person you are, to explore your passions, and express yourself in the myriad of ways that humans do, without arbitrary restraint.

What strikes me is how basic the concept of freedom is, and how far back efforts by persons, leaders or political movements have gone to restrict it. My readings have late are focused on  the ancient Persian Empire in the days of Cyrus and Darius. Then, and even  before in the glory days of Babylonia, the concept of freedom, represented in the cuneiform word or phrase “ama-gi” found expression.

It is said that the word and concept of freedom first appears in written form when the new king, upon

investiture (or thereafter, as an annual gracious ritual) would grant a form of amnesty to young males in servitude for unpaid taxes to the king, granting them “ama-gi” –permission to “return to mother.” The phrase eventually evolved into the concept of one being set “free,” thus, the very early iteration of freedom as we know it today.

What is striking about working in human rights in this century is the utter failure of modern day leaders to recognize freedom as an entitlement, an essential part of humanity–something individuals have sought and valued for  thousands of years.  As far back as we can tell, people eschewed servitude and honored those who saved them from it.

Assuming that many of today’s leaders are literate and have some basic understanding of history, leads one to wonder if they aren’t truly delusional, somehow believing that eventually they will escape the fate that all human kind faces:  Dust.  Perhaps they have never visited a museum and found themselves in the company of a “great” Pharaoh resting in a temperature controlled glass case being  gawked at by the masses–and those were the good guys.

Climbing the hill to get the world to recognize basic human rights is presumably  a challenge that was met long ago, now embodied in the Universal Declaration of Human Rights (UDHR).   Incredibly, in 2014 with several thousand years of civilized societies under our belt, there is  still an inordinately large number of persons who dictate to others what they can or should do with their lives, following an agenda that eschews every morsel of basic  human rights as we know it.

One would have thought that with all the technological and scientific advances, collective mankind would have figured out a mechanism to identify and remove those who  fail to honor basic human rights. Quite the opposite. In fact, there are wolves among those charged with guarding the hen house. Consider carefully the countries which have been selected as caretakers of human rights by selection to the UN Human Rights Council.

Were Klout  to give  the  Universal Declaration of Human Rights a score,  it would be low, very low.  If the document  is to be anything more than words on paper paying lip service to an aspiration, there have to be real consequences to those who derogate it.  To that end, there is some encouragement in the fact that a petition is currently in circulation that calls for the  removal from the United Nations Human Rights Council 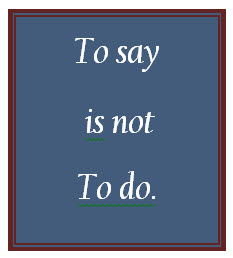 To those who stand up to tyranny, your voices are being heard. Do not give up. You are asking for nothing less than to live the precious few years we all have on this planet as the human being, with all your frailties and strengths, motivated by the hope of leaving a mark or legacy on the planet that represents the best humanity has to offer. We are with you. Your struggle is our struggle.  And to those working in the human rights arena be guided by this:  To say is not to do.