It has been written that for Hegel “essence” describes “how you come to the Notion, to the “key” to understanding something which, once arrived at, is the basis for all analysis of and “logical thinking” about the thing.”  For Kant, it was the thing “in and of itself.” After 40 years on the planet in contemplation and study of essence, being and rose colored glasses, I believe I managed to arrive 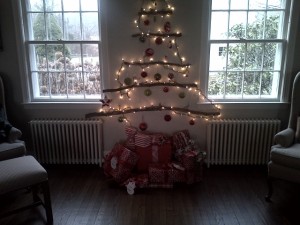 The Back Story:
Work and other preoccupations kept me from having the opportunity to fulfill the annual ritual of wandering deep in the tree farm to find that perfect Concolor tree, with long lemony scented needles (which almost never shed). There are strict parameters to trees in my home:  not too tall, not too short– recognizing that the measure of small is anything that is shorter than I.

This year the ritual did not happen. There would be no  tree in our living room this Christmas. On Christmas eve with children traveling far to come home, the negative gravitas of that decision  began to weigh heavily. By noon on Christmas eve, when the first installment of visitors left, my options were reducing exponentially with each passing hour, possibly in direct inverse proportion to my anxiety over the decision.  We headed out to survey the options. The two local nurseries were, not surprisingly, out of trees. I wasn’t disappointed. I saw those trees loaded on trucks from Canada in August. I did not want one of those.

Art is important to me and every home since my first had few blank walls. On her first visit to our home years ago, a neighbor remarked “this place looks like a museum.”  I have an aversion for crowded public places. For this reason I have always enjoyed having a handsomely populated home library and well adorned walls. This indulgence is one that suits my idiosyncrasies concerning libraries and museums. Which brings me to the large blank wall in my small living room.

Admittedly I had some inspiration. Somewhere along the way I managed to collect an image of a two dimensional tree made of twigs. It apparently struck me as I saved it to my hard drive. Now I was facing a blank wall, only a two hours remaining before the first child arrived home, and a fireplace mantel, that while out of the ordinary beautiful, was not  a substitute home for Christmas presents accustomed to sitting under a tree.  We were in the car, and though I ruefully glanced at  the  empty tree lot,  I proceeded on to CVS resolved to pick up two dozen clear “hooks” and convert an empty wall into a “tree.”  A  few minutes later, I was pulling into the driveway, threw the car into park,  scrambled into the wooded area adjoining the driveway to gather a half dozen long boughs that had been cut from a downed tree the winter before.

I laid them out on the living room floor—imagined the configuration that would best approximate a  “tree,” marked where my partner needed to make the trim cuts, grabbed the box of “favorite odds” ornaments from the attic and a string of lights. A large star-fish topped off the work which was assembled with the help of dark brown English twine  brought back from one of my London jaunts that I knew at the time, would someday come in handy. That day had arrived, and sooner than I thought.

The base was formed by (an empty) beautifully wrapped square box which was soon joined by the other presents. I plugged in the string of lights and there it was: The Christmas Tree, and really, a fairly perfect tree too.

Later in the evening  I sat with my daughter in the living room gazing at “the tree.” My analysis: it provided the function of “housing” the gifts below. The lights twinkled. The oddity of the ornaments, all favorites for one reason or another, allowed me to savor each one in a way the traditional tree did not. An early gift from my daughter of an ornament made by trafficking victims from NOMI, an organization that serves victims of trafficking was added to it—and fit in perfectly. It meant something–a gift from a child that recognized her mom’s work and something that was important to me. The Starfish atop it was personal too—starfish have always been in our Christmas trees, a symbol of our life these last many years living near the water. It was balanced. It was beguiling. I had managed to capture the essence of The Christmas Tree, without having one—and that I suppose is what Hegel and Kant were all about—capturing the essence.

I was startled. For the first time I had a truly deep sense of the essence of a thing, which was more amorphous than I had ever imagined and yet more real than anything I could have envisioned.  That assortment of sticks from the woods, strategically placed and ordinarily combined, generated a spot where we would sit, smile, giggle, share and realize in a very real and deep way, what this holiday is really all about.